Humans as humans have been around for roughly 200,000 years. Some of the first are still waiting in line at the DMV.

It took that long to get to around 1 billion of us. That’ a pretty low population density, and anthropology suggests that there really was no such thing as “work” until agriculture started around 8,000 to 5,000 years ago.

Huh? Well, let’s start by defining “work” as I use the term here.  I don’t mean simply the plain dictionary definition “Activity involving mental or physical effort done in order to achieve a purpose or result.” I mean work that is done to produce a surplus, so that surplus can be used in some form of exchange to fulfill needs outside the result or immediate purpose of the work.

So when agriculture started, work was farming, which produced a surplus. This surplus had to be administered, and that in turn led to mathematics. How to divide this pile of grain amongst the people, and retain some for the administrators? It needed some simple sums, and that got math underway.

Fast forward, at least in the West, through Greek and Roman civilization, then into the Dark Ages. Want to know about command and control? Think feudalism and suddenly your boss might not look so bad!

For the next few thousand years, the majority of work took place in the field. Then back in the 18th century someone noticed that a boiling kettle rattles its lid, and bingo, the Industrial Revolution! (I know, there was more to it than that, but hey, three minutes.)

With that, the center of production moved to the factory.  Dad, and often Mom, and often Junior, were stuck in the factory for umpteen hours a day.

I’m not going to go into the dehumanizing effects in detail, I’m not going to touch on the dawn of socialism that sprouted from studies of the dismal conditions in the factories. But we need to note that it was dehumanizing, and I will be researching and qualifying this assertion. The point is that we did not evolve to work in factories. (Obedience ended up taking a bashing in due course. Russian Revolution anyone? French? American?)

Back to the plot. The smart money didn’t just go into the factories. The Prussians came up with an education system that graded pupils for likely job training. Roughly, they were looking for one stream who’s major requirement was that they should be obedient. They would do as they were told in the factories, and they would charge into the face of the enemies guns when ordered.

The other main stream was that of the professional. The professional could manage the obedient and solve the difficult problems. Accountants, engineers, lawyers, and so on, and the education was designed to have these people be very highly invested in their qualification. It was self-defining. I can’t prove it, but I’d guess that the social exchange that includes “So, what do you do?” “Oh, I’m a blah-blah” comes from this. The question is about doing the reply is about being. Remember this point. 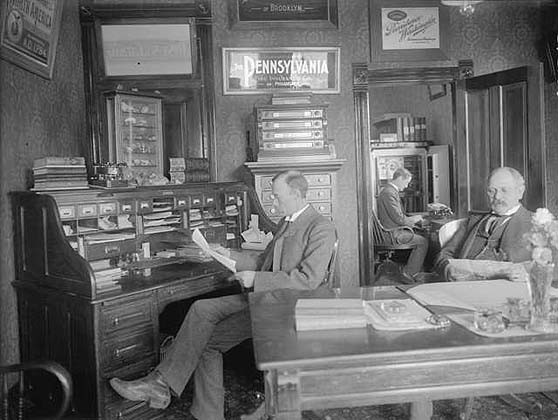 It worked like a charm, and the benefits of the Industrial Revolution propelled us up to the 7 billion people on the planet today.

Taylorism (aka Scientific Management)) standardized work.  For Science! The humble worker was measured and quantified and became a fungible unit of production.  Moreover, Management became a profession. Who knew? “Swap them around, it doesn’t matter, I’m qualified to command them, the system will still work!”

And it did. Very well. (Never mind the squalor, feel the width!) We have an Information Economy.

But we have an Industrial Education…

In the next exciting episode, we’re going to discuss mindset and how simple it can be to transform what’s possible with a slight change in language. What’s that go to do with this week? Read on and you’ll see…

Video of my presentation “The Seven Wastes” at Portland

This site uses Akismet to reduce spam. Learn how your comment data is processed.